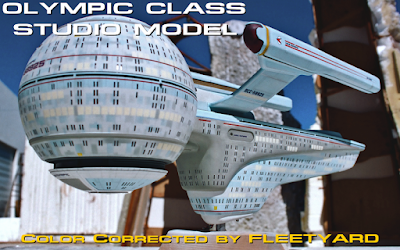 Here are my color corrections of the Olympic Class studio model photos. The photos were originally taken by Bill George, who designed and built the miniature in his own time, before offering it up for use in the final episode of The Next Generation, “All Good Things”. The design pays homage to Matt Jefferies’ concept art for the Daedalus class from the 22nd century. The photos feature George’s original name for the ship, the USS Olympic, before it was renamed into USS Pasteur to better reflect its use in the episode as a medical vessel. You can also see the Starfleet emblem from TNG on the spaceship. In the final episode, it was replaced with the Starfleet medical symbol. The color corrections are minimal. The photos were a bit overdriven.
Here you get to the COLOR CORRECTED PHOTOS.
Posted by FLEETYARD
Labels: STAR TREK Size Comparison Chart, Star Trek The Next Generation

The size of the Enterprise-E ARGO Shuttle

The shuttlecraft ARGO - seen in Star Trek Nemesis - was designed by artist John Eaves. Eaves classified the Argo as a heavy transport shuttle. It includes a buggy for planetary ground missions.
For my calculation I used the real size of the ARGO buggy. According to blueprint, the car is 5.33 m (17.5 feet) long.
Taking into account the size of the loading hatch, this results in a length of 20.04 m for the ARGO. In addition, this length allows a cockpit height of 2m.

Here are the size chart with the ships from the Alpha, Beta and Gamma Quadrant. 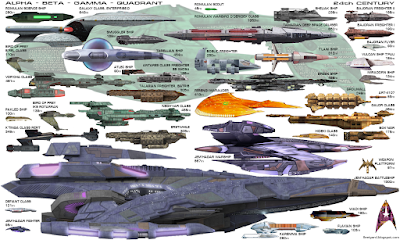 Here are the size chart with the ships from the Alpha, Beta and Gamma Quadrant. 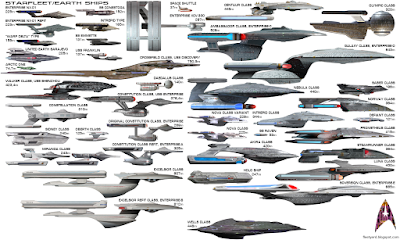 Here are the size chart with the Space Stations and Outposts seen in Star Trek Deep Space Nine. 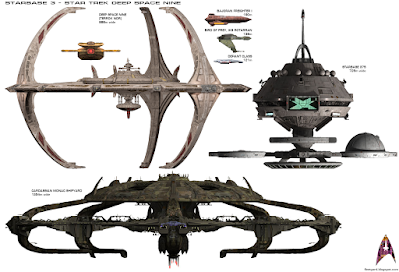 Here are the size chart with the Space Stations and Outposts seen in Star Trek Voyager - including Starbase Copernicus from "Borg Invasion 4D". 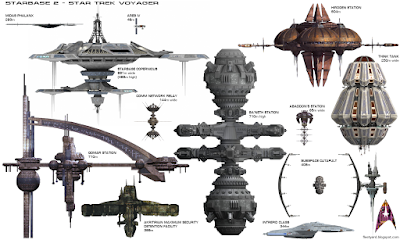 The size of the Excelsior Class

The Excelsior-class was a type of Federation starship used by Starfleet from the late 23rd century through the late 24th century. As a long-range research vessel, it was the backbone of Starfleet for nearly a century, making it one of the fleet's longest-serving spaceship designs. The Excelsior-class was later replaced by the Sovereign-class.
If you consider two decks for the outer part of the saucer (deck 7 + 8), the result is a perfect division of the decks for the whole ship. This gives the height of the neck to the main body an even number of decks.
The large MSD (Master Systems Display) from the background of the Excelsior class bridge also gives the number of decks that I calculated: 32.
Incidentally, this division also corresponds exactly with the additional construction on the main body of the Excelsior Refit (USS Enterprise-B). The place where the Nexus energy ribbon hits the Enterprise-B and thereby pulls Captain Kirk into the Nexus is exactly two decks high.
According to Andrew Probert's size chart (he extended the ILM chart for Star Trek: The Next Generation, sizing his Ambassador concept halfway between the Excelsior and the Galaxy class), the official length of the ship is 467m (1531 ft). If you pull decks into the side view of the spaceship, this size seems a bit too small.
Commented on this by Bill George of ILM:

"The only description we had at the time was that it was "souped-up" and bigger than the Enterprise. The size the miniature was built to was determined by the camera guys as being the optimal size to shoot. As I recall Nilo [Rodis-Jamero] did that size comparison chart, but it wasn't necessarily followed. The issue of true scale wasn't a consideration. Budget, ease of use, art direction and dramatic intent were what influenced the construction of the ship."

After calculating the decks, this results in a length of 606.9m.
If the Excelsior class were 467m long, then its decks would be only 2.3m high (inclusive 0.5m for EPS cables, power cables, ...). Then only 1.80 m remained for the clear height of the rooms.
The size of 606.9m corresponds much more to what can be seen optically in the Star Trek series: